The control has been optimized to minimize speed variations. The speed controller is a PI-controller. After a rated value jump of the speed, the measured speed does not swing over. The torque and current control are united in the speed control to a delay part of first order with a small time constant. After rise of the load torque by 100 Nm, the speed keeps within a tolerance band of 3 % (Figure 2).

Likewise, the position control of, for example, workpieces, tools, conveyor baskets etc. belongs to the applications of electric motors. The measuring result in Figure 3 proves that Switched Reluctance Motors with 16 stator poles and 12 rotor teeth are suitable position drives. After a rated value jump of 1000°, the motor performs about 2,8 turns and reaches the rated value without over swing in one second.

Mains friendliness of the Switched-Reluctance-Drive

The mains converter is a three-phase-self-commutated IGBT-Converter. The control of the mains current has been optimized in a way that the drive, in stationary running with a cos(=1 and with a power factor of about one, receives energy from or feeds energy into the threephase current mains. This results in a sinusoidal mains current and in conformity of the phase position between current and voltage - at long last the mains friendliness of the drive. 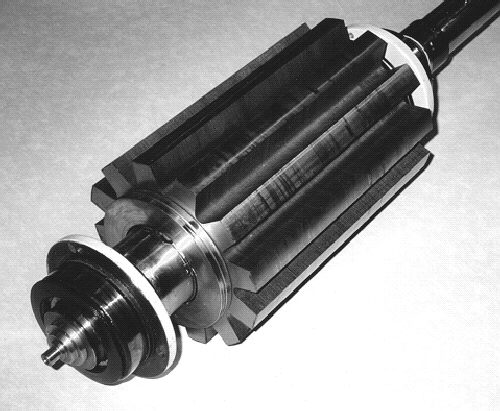 Rotor for the 16/12 Switched Reluctance Motor