With the trend towards smaller and high power-density machines, the thermal behavior of the machine is becoming increasingly important. Besides the windings and the magnets in Permanent Magnet Synchronous Machines (PMSMs), also the bearings are one of the critical components. The rotation of the balls inside a ball bearing significantly influences the thermal behavior of a bearing itself. Approaches from literature neglecting the thermal ball resistance or keeping it constant over the whole speed range do not give an accurate temperature estimation in all speed ranges for electrical machines. Therefore, we present a novel modeling approach with a speed-dependent and speed-independent thermal ball resistance. Contact resistances, convection phenomena and the power loss inside the bearing were calculated as proposed in literature. A brief summary of calculating the losses and contact resistances in a ball bearing is presented. It is shown that the ball resistance decreases in exponential shape with an increasing rotational speed of the ball. The ball resistance is not dependent on the diameter of the ball, if it is normalized to its stationary value and a function of the circumferential speed. The speed-dependent resistance equals the stationary resistance at about 280 mm s -1 . With this approach, the temperature distribution of a ball bearing can be accurately determined over the entire speed range, whereas existing literature approaches are only accurate in either the low or high speed range. 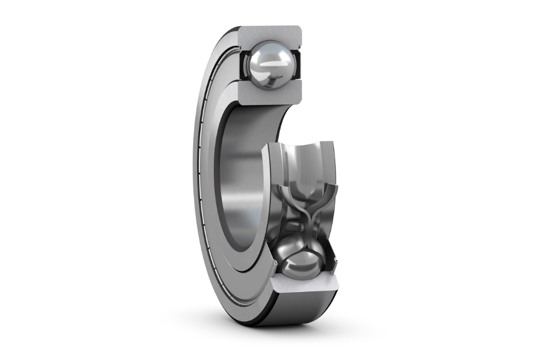